So first of all, let me just say that I thought it was awesome!

I think it has a fresh, exciting plot that makes it stand out from other explosion-driven action movies.

I wasn’t too sure what to expect, other than Tom Cruise’s character gets to reset every time he dies, or something like that from what I gathered from the commercials.

Once it started getting really positive reviews though, I knew I had to see it.

Another thing that I enjoyed about it was that it was pretty funny, I wasn’t expecting that. Usually action movies have a few one liners or scenes that are pretty funny, or at least to chuckle at and quote later, but this one had me laughing a lot.

Ok, prepare for a few spoilers! If you haven’t seen it yet, you probably shouldn’t read on, until you’ve seen it!

Tom Cruise is a Major in the military who’s assigned to go into battle in the front lines of a world war against aliens that have invaded Earth.

He expectedly refuses to and puts up a fight, resulting in him being arrested. He wakes up delusional on a military base and tries to explain his way out of being drafted onto the front lines. He ends up thrown into the barracks of the “J Squad”, the outcasts of that military base. Everyone on the base knows that he tried to flee being drafted because of his rank, and thinking that he’s “too good to be on the front lines” so obviously there’s a lot of tension in the room, especially because he’s still in his formal sergeant uniform.

The next day they’re loaded onto a plane and parachuted out over beaches in France. Long story short, he gains the power to reset the day and go back in time after blood from one of the “Alpha” Mimics touches him. Whenever he dies it resets the day and sends him back to the point where he woke up on the military base. This happens again and again, but in a funny way, not in an annoying way like the movie Vantage Point. As he continues to live the day over and over again he makes new choices which leads him to Emily Blunt’s character, Sergeant Rita Vrataski. She’s the hardcore female protagonist of the film. She’s tough, rough and ready to fight. At first she doesn’t want anything to do with him, but once he’s able to explain things she takes him to a scientist on the base who knows more. It turns out that she used to have the same power that he has and that she and the scientist have been trying to figure it out for a long time. 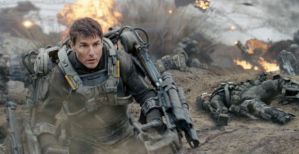 They begin to make progress and through dreams and visions that Tom Cruise has of the “Omega” alien because of his power, they try to find it and kill it, since it controls and gives life to the mimics. Eventually during one of the tries he’s wounded and taken to a hospital, where they needed to do a blood transfusion, which results in him losing his power since the power was in the blood. He now only has one chance to find the Omega alien and kill it. They finally reach the main alien in Paris and he’s able to throw an explosive device into the alien and it kills both of them, but luckily by chance, blood from the alien touches him and he regains the power.

He is reset to the day before when he first meets with the General, who instead of assigning him to the front lines again, holds a press conference to announce that the Mimics have been defeated. He runs into Vrataski who asks “What do you want?” He smirks and laughs.

I give this movie a 5/5 rating because it’s well-made, it has a smart plot, good humor and it’s just a fun watch.

One thought on “Edge of Tomorrow Review”