This is an awesome car, I remember watching Scooby Doo when I was little, and I thought their car was awesome. I even have a toy version of it somewhere at home.

So another in the van category, this car is hilarious. “I spent my life savings turning my van into a dog” It also probably has ketchup and mustard all over the back of it. But at any rate, a pretty funny car, it’s too bad he traded it for a motor bike. 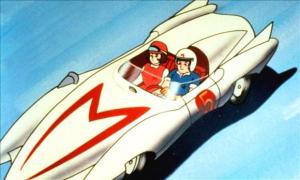 This car was sweet, I thought it was so cool! I mean all of the crazy things it can do! Go underwater, jump over ditches, saw blades come out the front, I mean what else could you need in your daily commute? I never saw the remake movie from a few years ago, but I’m glad and a little surprised that they didn’t redesign the car, good for them. 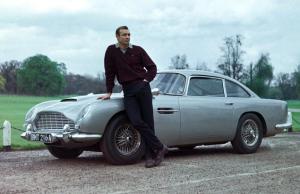 This car is awesome, I think it’s easily the best Bond car, way better than that ugly Lotus Espirit, sorry Lotus fans. But with all the gadgets on it, much like the Mach 5, except with machine guns, so that’s why it made #7 and the Mach 5 #8. 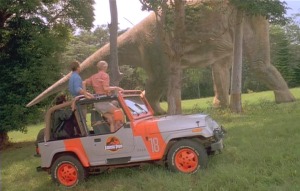 I always loved these Jeeps, the paint jobs are sweet. They don’t explain it in the movie, but in the book it says that the red stripe was so the Triceratops wouldn’t charge the cars, apparently that was a problem. It’s too bad that one of them now has a nasty old carcass and a Dilophosaurus stuck inside. Maybe the dinosaur got out eventually, who knows, maybe Jurassic World will tell us! One can only hope. 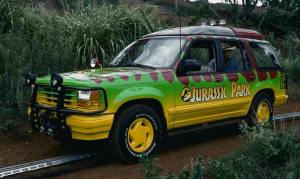 I like these ones more than the Jeeps for some reason, maybe it’s the paint job and the huge plexiglass bubbles on top, because I mean come on, it’s way cooler than the Jeeps. But also, I guess the plexiglass bubble is it’s major downfall, that and the fact that it’s only electric and stuck on a track, except when the T-Rex tips it over. I feel like that’s a theme in the Jurassic Park movies, T-Rexs smashing the cars. But in spite of it’s major downfalls, I think this is the coolest car from all the Jurassic Parks. But maybe Jurassic World will prove me wrong, let’s hope so! (I’m not obsessed or anything btw…)

No one can disagree that the DeLorean in Back to the Future was awesome. It can time travel, argument finished. Seriously though, these cars were awesome, even if real DeLoreans sucked and weren’t successful, even if they were the main stars of Back to the Future. The only part of the window that rolls down is that little section at the bottom, it’s so low to the ground and small inside that it alienates all big and tall people. Oh well, it’ll still live on in these movies.

This is easily my favorite Batmobile. It’s so sleek and cool, way better than the Batmobile from Batman and Robin, the Batman movie that ruined the franchise until Christopher Nolan took over, but despite the movies getting better, the Batmobile did not. The Tumbler from the Dark Knight trilogy was not my favorite either, making this Batmobile a good #3. 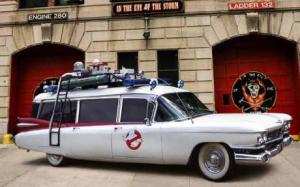 This car is so awesome, partly because it’s a 1959 Cadillac, which is my favorite car, but also because of it’s practicality for the Ghostbusters team. It can fit all of them and a huge ghost trapper in the back. It’s an iconic car that will always be considered one of the best Movie cars.

And wait for it…almost there…all of your reading has paid off! Here it is!

Here it is! The #1 Movie/TV/Cartoon car ever! Cruella DeVil’s car from the animated 101 Dalmatians classic is the best looking cartoon car ever! It’s sleek, fast, long, beautiful. She eventually turns it into a fire breathing hotrod and then crashes it trying to chase her one vice, but it will always go down on the top 10 lists. This is the car that made me like cars, that’s how good it is. From the curvy lines of the fenders, the rich red color, her initials all over it, the angry, menacing looking headlights and windshield and the sloped back all earn this roadster/hotrod the #1 spot on my list.

Here’s the first tease/glimpse of it that we get in the movie, even if it’s only for a split second…I’m salivating over here. 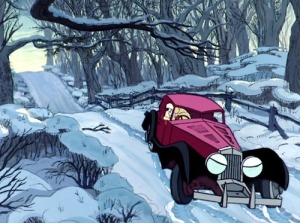 Here’s another angle showing off the front end better. 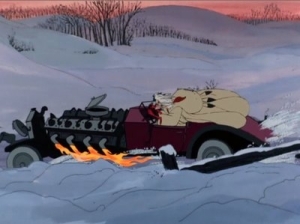 And finally, she lets the puppies get the best of her and crashes through some trees, which, through the beauty of animation, and ignoring physics, tear apart most of her car, turning it into a hotrod, which she then proceeds to ruin it more by attaching it to a moving van, but I guess it’s really Horace and Jasper’s fault that it gets totaled because they lose control of their creepy van and slam into the side of it, ripping both cars down to their bearings, phew! What a long-winded sentence.

So there you have it, my definitive list of the best 20 movie/TV/cartoon cars of all time, and if you disagree with me, you’re wrong, and you can go write your own list, or you can leave me a comment or email me below :]