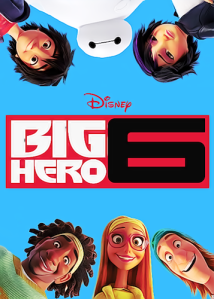 aw Big Hero 6, it was actually pretty good. I went in to the theater expecting that though, since it’s getting such high ratings, 94% from users.

It didn’t necessarily introduce anything new, or was it very original. It was about a punk kid, Hiro, that’s involved in underground robot fighting until his older brother convinces him to put his inventive mind to good use and become a real engineer.

So Hiro has to get a gang together to defeat the bad guy, and chooses his brother’s nerdy college friends, or rather, they choose themselves. And along for the ride the whole time is Baymax, a big white medical assistance robot who was his brother’s invention, slowly becomes Hiro’s best friend.

So it wasn’t a super original idea, but it does have a good plot twist at the end, and I enjoyed the characters, especially Fred and his fighting costume. 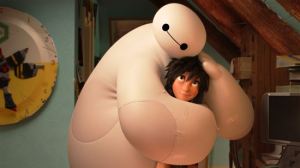 It’s a fun adventure movie, and I thought that the animation was great. The hair looked natural, which is the hardest part to animate, and I thought the action scenes looked great as well. My favorite animation scene was when they travel through a portal into another dimension, the colors and animation looked amazing, it kind of reminded me of Interstellar. Also, Baymax sort of reminded me of TARS from Interstellar, a robot who is built to help and support humans. The difference is that TARS has a humor and a sarcastic program, whereas Baymax did not, and didn’t understand expressions and jokes, which was also funny.

Anyway, Big Hero 6 was a pretty good movie, even though it wasn’t super original or anything that I haven’t seen before, it’s still sweet with a touch of humor, a Disney trademark really. I’d give this film a 4 out of 5 stars.