What is a Millennial, anyway? I’ve seen a lot of articles recently, mostly written by Baby-Boomers who seem to confuse Millennials with other generations, so let me qualm and explain who and what Millennials are.

Millennials are people born between the mid-1980’s and the mid-90’s, they grew up while computers, the internet and cell phones were all progressing, but not to the point they’re at now. We all remember 9/11 and how it changed everything. I remember watching it on the news in class, they literally paused the whole school day so we could just watch the news.

We grew up with good video games, not the crappy 80’s ones, but with the N64 and the first Playstation. We had Counter-Strike and GTA3, Vice City and San Andreas. We remember brick cell phones, Razor phones, Blackberries and slide phones. We all had Gameboys and Pokemon Yellow. Ipods, Dell PCs (Dude, you’re getting a Dell!), and the list goes on and on, you get it, right? This is all still fresh in our memories. 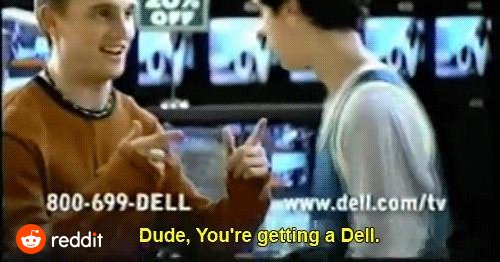 I believe that the defining moment in our lives though, even more than 9/11, was the 2008 economic crash. It happened right as a lot of us were entering the workforce or college, and it hit hard. It still follows us to this day, as most Millennials make less than our parents did at our age. Our lives have been defined by apartments, student debt, retail and food jobs, penny-pinching and trying to avoid the hospital as much as possible because of how outrageously expensive it is. You can no longer provide for a family on a single-income. It takes years, and sometimes multiple jobs, to even come close to affording a house for a lot of us. If you live outside of a main city it’s a bit easier, but no one wants to live in those areas!

Millennials are more diverse, liberal and prone to big city living. We want to be where the people are, no more suburbs and solitary living! According to a Pew Research statistic, the Millennial generation is the most diverse of the 4 living, adult generations, (Silent Generation, Baby-Boomers, Generation X and Millennials), only 56% are white, while the Baby-Boomer generation is 72%, and Millennials are 21% Hispanic, 13% Black, 7% Asian, and 3% other, significantly more than the other generations. We’re also more liberal, according to this Pew Research Poll, Millennials have the most liberal and consistently liberal views of the 4 living, adult generations.

Millennials are also misunderstood by other generations, who typically write inaccurate articles and opinion pieces for Baby-Boomer-run news outlets. They cast us as lazy, entitled, cheap, snowflakes. Let me tell you something! We’re not any of those things! We’re cheap because we have no money. We’re not entitled, we just believe that the government should be doing more to help its people. We’re not lazy, we actually work really, really hard, and we’re not snowflakes, we just care about other people more! I love it when people call liberals snowflakes, it always backfires. Just look at the “reviews” of Captain Marvel so far, it hasn’t even been released yet but all of these conservative trolls are commenting, whining about being butt-hurt over Brie Larson’s innocent comments on the diversity of the press conference for the movie. Talk about delicate snowflakes! We’re also blamed for everything, ruining this, and ruining that: 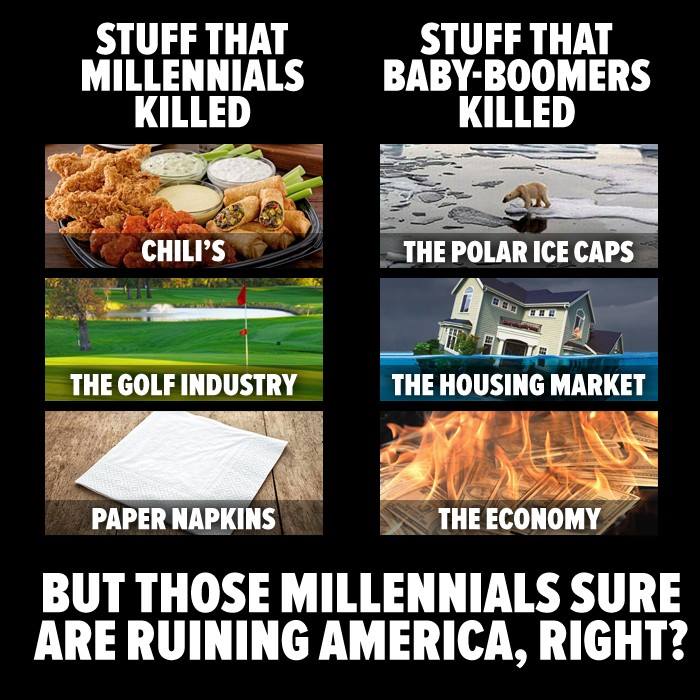 Older generations have a few nicknames for us as well, like the Peter Pan generation, or the Boomerang generation. Guess what? You did this! They call us the Peter Pan generation because they believe we have our heads in the clouds and live fantasies, well guess who told us that? Ever remember hearing “You can do whatever you want with your life!” Or “You can be whoever you want!” Yeah, me too. And the Boomerang generation, don’t even get me started! Look at that meme above and you’ll see why so many have to move back in with their parents, it’s usually not by choice!

We’re also looking for experiences, that’s why music festivals like Coachella are so popular. We want escapes from the struggle, that’s why I believe that in the near future Millennials will be the next “spiritual revival” generation. It will be a new wave of Christianity, but a more diverse, less “white American” movement, good!

Oh, also, we can’t wait to take over! We’re so tired of all of these old white dinosaurs in Congress and other places of authority that won’t think about us and don’t care about the future. I just keep telling myself, a few more years, maybe a decade at the most, until they’re out of power and we take over! (I didn’t say death, I’m not that cynical!) So get ready for change!

Anyway, this is a lot of qualms for a Sunday, what do you think? Are you a Millennial or a Baby-Boomer? Do you agree with this?