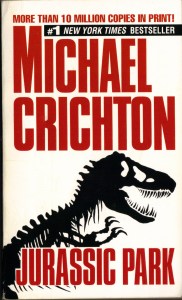 Jurassic Park the novel, written by Michael Crichton, was published in 1990 and became a New York Times bestseller.

The 3 biggest differences between Jurassic Park Movie and Novel

For those of you who are as excited about Jurassic World and haven’t read Jurassic Park novels yet, you need to. Jurassic World is less than 2 months (!!) away and we’re as restless as a velociraptor pack hunting a tasty Australian snack (get it?).

The novel has a lot of connections that we’re expecting to see in Jurassic World, so here are the 3 biggest differences between the book and the movie.

1. Just about everyone dies in the book

Game of Thrones, anyone? 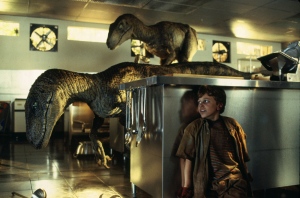 In the novel, we see our favorite characters: Alan Grant and his colleague Ellie Sattler, the dinosaur experts; Ian Malcolm, everyone’s favorite smarmy chaos theorist; and of course, the eccentric bajillionaire and creator of the park himself, John Hammond. In the movie, just about everyone makes it out alive except the Aussie hunter Muldoon and my boy Samuel L. Poor guy.

However, in the novel, nobody makes it out! Alan Grant and Ellie Settler manage to escape with the kids and the spineless investment banker Donald Gennaro as they watch the park get blown up by the Costa Rican government. Our favorite Aussie hunter Muldoon almost gets his butt bitten off, but he’s fine too.

Dennis Nedry (the double-crossing computer engineer who steals the embryos): blinded by a dilophosaurus and then eaten alive

Samuel L: torn to bits by a velociraptor

Ian Malcolm: T-Rex almost bit his leg off and, despite his most complex ramblings about chaos theory for much of the novel, died from his wounds

John Hammond: Broke his ankle and devoured by those little green lizards (“Compy’s”) from the second movie The Lost World in a satisfyingly got-what-was-coming-to-him ending

Countless park workmen: probably all dead by the thousand other man-eating dinosaurs 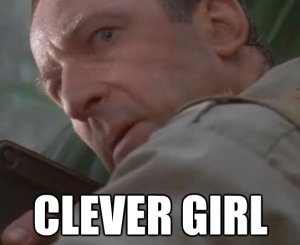 2. You think raptors are scary? Read the book

We all know the famous raptor scenes from the movie: the edge-of-your-seat kitchen scene with the kids, the classic “clever girl” hunting failure, and so on. However, we see far more detailed (and terrifying) behavior in the book.

Raptors had almost no predators back in the day. Even the T-Rex wasn’t down to mess with those guys. In the book, the raptor pack starts to breed, and they’re pissed at just about everything. Super smart, super deadly, and super not-friendly to mankind, Michael Crichton goes into impressive detail about exactly how they kill us with ease – through unsettling pack mentality, they surround you, rip open your guts, then eat you whole. Yum. Basically, anybody who had any contact with a velociraptor. Moral? Stay away from raptors.

3. The animals escaped the park and started breeding across the world

Well, not the whole world. But the ending of the book implies that certain species of dinosaurs escaped the island and managed to stay alive by eating certain types of lysine-rich food (a chemical which they were genetically engineered to need to survive). 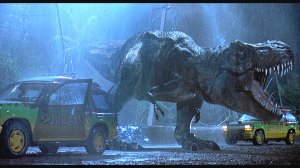 Raptors have absolutely no predators in today’s modern world. In the book, a ship was unwittingly transporting several breeding raptors to the mainland, which would have risked a literal epidemic of raptors.

Can you imagine? In addition to that long commute to work, putting up with your annoying boss, and getting that measly paycheck every two weeks, we almost added the danger of being eaten by a velociraptor to the list.

This was a guest post by Anthony Moore from StuffGradsLike

One thought on “Jurassic Park Novel vs. Film”